Following on from the previous post in the ‘Alternatives to Scratch’ series I thought I would share Code Combat, this is another great resource which has quickly become a favourite at my school. Code Combat is different to previous alternatives that I have shared as it focuses more on Syntax or Character based programming rather than using a familiar Block based format, that said, both you and your children will be comfortable in no time.

Put simply, Code Combat is a web based platform for students to learn computer science while playing through a real game. It is a community project, with hundreds of players volunteering to create levels. Code Combat supports Java, JavaScript, Python, Lua, CoffeeScript. The game is a role play game, in that you choose a character and play levels/missions. Each level builds on the user’s knowledge of coding and without noticing players are doing coding they may not be confident to do in a different setting.

With my class and my Code Club I chose to use Python as we have number of Raspberry Pis and we are aiming to progress onto Python. I would recommend this for primary pupils for a few reasons: 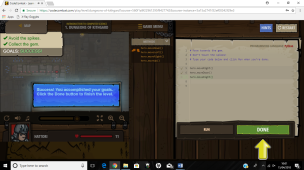 Similar to Rapid Router, Code Combat has decided to go along a step by step prescriptive route.  As I have said previously this could be beneficial in a number of ways:

I tried this out with my Code Club, which is made of 9-11 year olds and they loved it! When users are getting started they can choose their character, each of them has they own strengths weaknesses and back story. I thought a nice quick link to this could be top trumps which is fantastic for teaching databases and data entry. Just a quick warning that some characters require a subscription but there are options to continue for free.

Users work through the game and win gems and experience points, when levels are completed they get experience points and gems; they also get points for less errors in their coding. They can use these points in a store before moving onto the next level and equip their player with extra features. That’s the basics of the game covered, as with other coding software there are strings, variables, loops, conditional and while statements but these are explained and demonstrated when players start the level.

There are some great features on the Code Combat website such as teacher guide and ‘cheat sheets’ complete with answers. There are also progress guides for children and guides for using python.

To summarise, I have explained previously why I am should a big advocate for a rich digital diet. Coding on different software has the advantage of understanding the concept rather than following steps from memory. I see Code Combat as a progressive step rather than a different one, using Syntax based software adds a new challenge for pupils.

Also, I love the take that Code Combat have chosen where levels build on each other in a role play game. This is similar to Code Club but the difference of completing levels, gaining experience points and moving around a digital world adds a more engaging element.

Have you tried using Alternatives to Scratch? What works for you? Please reach out by commenting below!